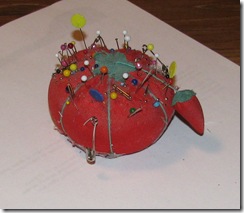 I reached for a pin in my pin cushion the other day and had to hunt around to find one.  It was then I realized that the pin cushion contained a MESS of all kinds of pins and other tools, many of which I don’t even use.

I found all sorts of pins.  The flower head pins don’t belong there, because I keep those in the pin cushion that hangs beside my flannel wall.  The ones with the large pink heads belong downstairs with the longarm.  T-pins and safety pins have homes of their own.  I threw away all the thick, fat, ugly, bent, corroded pins; they almost filled up the old film canister that I use for Sharps disposal.

I thought the job was done, but when I looked more closely at what I thought was an empty pin cushion, I realized there were a few needles that had been pushed down inside.  It called for pliers to get some of them out – I found 15!  And some of them look too big to ever have fit inside the tomato.  These I sorted out and put in storage (or discarded). 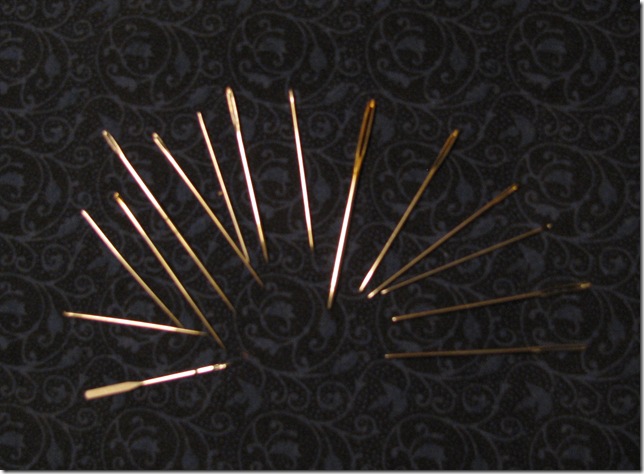 Then I refilled my pin cushion with lovely fine glass headed pins and put it back into the little pottery dish my son made in art class at school.  Doesn’t that look better! Now I know that whatever I find when I reach out for a pin will be something useful and a pleasure to use. 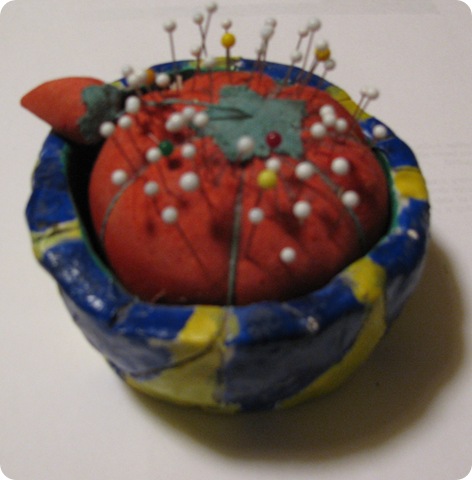 I spent a wonderful weekend retreating and quilting with friends.  As usual, we laughed a lot, stayed up late, ate too much – and got lots of sewing done.

One morning began with a gorgeous sunrise.  I wish my photo could capture the depth of the colours – the vivid pink sky was reflected in the lavender lake. 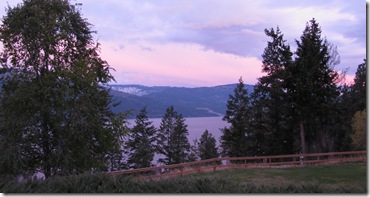 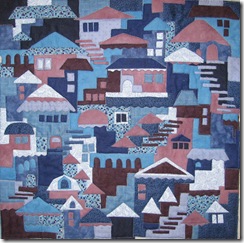 The  quilting on my current Happy Villages project is completed.. I think this will get a  dark binding and perhaps piping – pink?  How about the name “Village at Dawn”?

One project I took along was a bundle of fabric strips that had been donated to the Prayer Quilts group.  I made fifteen off-centre Cobblestone blocks with the strips, then was delighted to find a bit more fabric at the bottom of the stack to let me make one more.  Sixteen blocks is enough for a preemie quilt.  Next morning I was in the sewing room early and I took advantage of an empty table to lay out my blocks.  I was amazed to find that there were now nineteen of them!  I found a few scraps and made what my friend Brenda called my “renegade block” so that I could have a full extra row.  Now it is too large for a preemie quilt.  I will find some borders for it and see what it becomes. 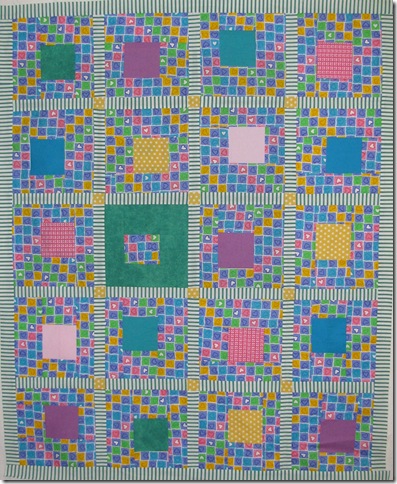 As my son would say -- “Yeah, about that….”
At the beginning of the month the contents of  the bag looked like this: 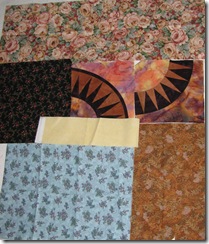 There are two batik New York Beauty blocks along with some fabrics that may or may not coordinate.  This collection came from a UFO swap with friends a few years ago, and I was supposed to “do something” with it.  I have an idea of what this could become, but at the end of the month, I’m afraid it looks exactly the same as it did.

I am going to claim a finish anyway.  A donated Lonestar top turned up at our quilting group.  Not the right size for a prayer quilt, and besides it would have been an absolute waste to simply put ties in something that complex.  There was a fund-raiser auction coming up, so I took on the job of finishing the quilt for that.  Here’s how it looked when it was done: 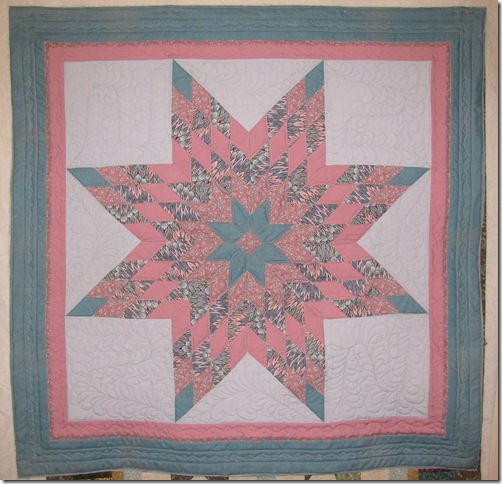 I’m guessing this had been in storage for a while before being donated.  The colours take me back a decade or so.  It has been beautifully pieced.  I wonder about the story behind it – why it languished unfinished and then simply was donated. 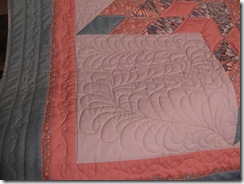 Here is a close-up of the quilting on one of the plain setting squares.  I used a variegated thread to give a bit of texture to the plain gray fabric.

Technorati Tags: UFO,quilting,challenge
Posted by Louisa at 7:41 AM 5 comments: Links to this post