I belong to a group that meets annually to share a challenge project.  This year we worked from a set of photographs.  The challenge was to base a quilt on one of them.  I chose a photograph by Keith Henderson of the sculpture called “Jaguar” by John Henry that stands in Vancouver.

I imported the photo into my Electric Quilt software program and traced it, simplifying and eliminating portions until there were only a few shapes left.  Then I rotated the image to form a pinwheel-like design.

I repeated the trapezoid shape in the borders.  Quilting began with stitch-in-the-ditch around the design elements to make them stand out and was followed with a zig-zag meander in the gray background to make it recede. 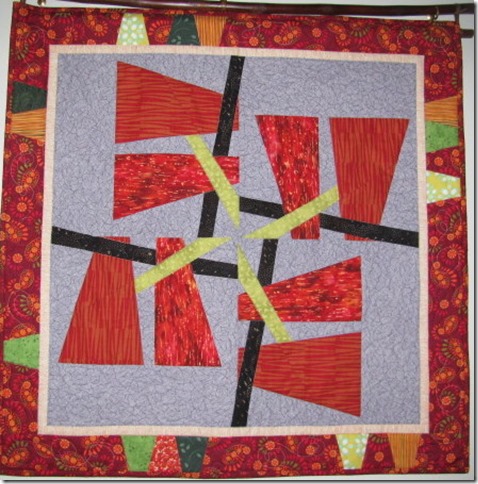 Posted by Louisa at 11:32 AM No comments: Links to this post