This project is the reason I signed up for this challenge in the first place!

I began my African Collage in May of 2010 when I took a class from Pippa Moore at Quilt Canada in Calgary.  When Judy announced the challenge for 2011 I was quick to add this to my list because I wanted to get it done.  But that number was drawn in December, and no matter how hard I tried, I wasn’t getting any quilting done that month.

So African Collage took its place on the list for 2012, and its number came up for this month.

I am pleased to report progress.  When I took the pieces out of their bag I found I had four panels, the three animals and another with African people on it.  Each panel had the beginnings of borders.  Try as I might, I could not get the components to get along nicely.  So I removed the fourth panel and decided to go with just three.  I worked in some lighter fabrics, repeated some motifs, and came up with this arrangement. 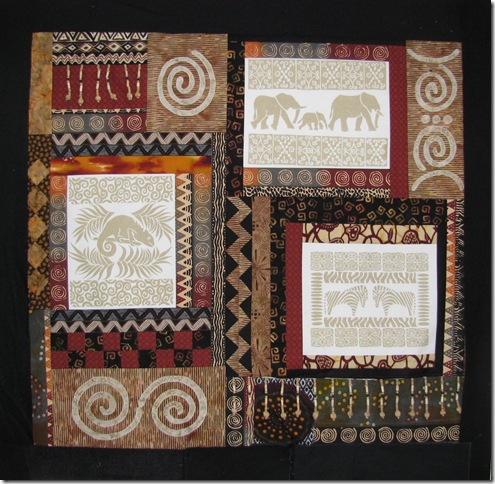 It is not a perfect design, but it is much closer to being a completed design!  Next come the borders – I’m auditioning different black fabrics and different widths and trying to decide if I need something else along the top before the black.

And another near-finish to report:  A few days ago I pulled out a small top that had been folded together with its batting and moved from place to place in the sewing room for several  years.  I had made some of the the scrappy blocks, then passed them on to a friend to “do something with”.  She made more blocks, sewed them all together, and handed it back to me. 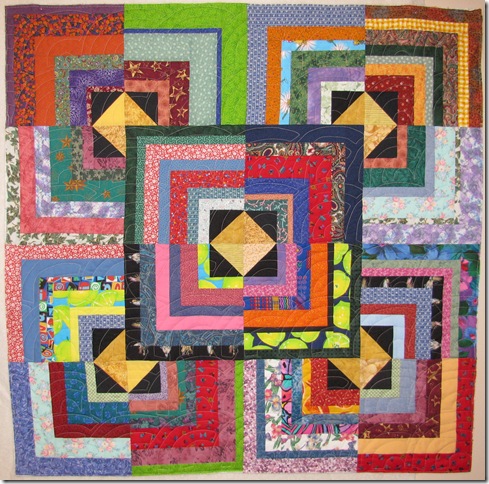 I’ve quilted it.  The blocks are scrappy, the batting was pieced from leftovers, the backing was made from several odd bits of flannel.  The binding will come out of the box that is labelled  “Binding Leftovers”.  Then we will find some small person to give it to!

A special place for quilters 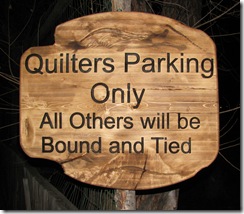 Technorati Tags: parking sign,Granny's House
Posted by Louisa at 8:11 AM No comments: Links to this post